'Tis the Wednesday of the Third Week of Advent: Advent-link & Wikipedia-link. 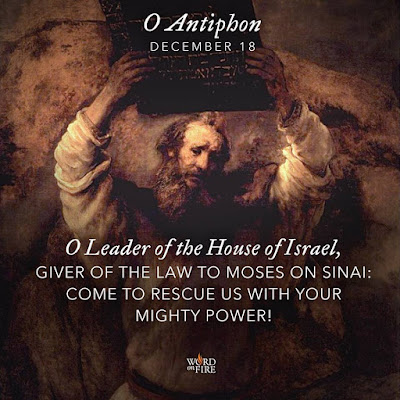 Scripture of the Day
Mass Readings—Wednesday of the Third Week of Advent
The Book of Jeremiah, chapter twenty-three, verses five thru eight;
Psalm Seventy-two (R/. see: seven), verses one & two, twelve & thirteen, & eighteen & nineteen;
The Gospel according to Matthew, chapter one, verses eighteen thru twenty-five. 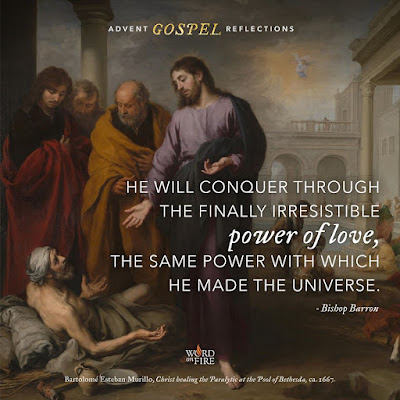 Friends, in today’s Gospel an angel tells Joseph in a dream to name his son Jesus "because he will save his people from their sins."

Well, that’s the good news of Christmas. The rightful King has returned to reclaim what is his and to let the prisoners go free. The God announced by all the prophets and patriarchs—by Abraham, Jeremiah, Ezekiel, Amos, and Isaiah—is a God of justice, and this means that he burns to set things right. God hates the sin and violence and injustice that have rendered gloomy his beautiful world, and therefore he comes into that world as a warrior, ready to fight. But he arrives (and here is the delicious irony of Christmas) stealthily, clandestinely—sneaking, as it were, unnoticed behind enemy lines.

The King comes as a helpless infant, born of insignificant parents in a small town of a distant outpost of the Roman Empire. He will conquer through the finally irresistible power of love, the same power with which he made the universe.

Reflect: How did Jesus conquer with love, and where are you called to do the same?

In today’s reading, we hear God continually call the people to repentance, prophesying the coming of a just King whom God will send to His lost people. After being delivered from slavery in Egypt, the people eventually lost their land, but the prophecy promises it shall be restored to them and a righteous King, a worthy descendant of David, shall reign over them.

As Christians, we see this prophecy fulfilled in Christ Jesus, who did not come to establish a worldly kingdom, but rather the Kingdom of God, where He reigns in the hearts and lives of His people. Jesus came to be the Lord of men's hearts. Whomever rules men’s hearts, rules the world. What rules your heart? Are there some things in your life that take priority over God and your faith?

Today, pause and reflect on Christ as the King of your heart. This Christmas, the Lord will enter our midst as a small baby, humble and weak, yet mounting the throne of the cross, and wearing the crown of thorns, the great Warrior-King will battle the enemies of sin and death, and defeat them, rising victorious! Let us ask ourselves, have we welcomed Jesus more fully into our hearts this Advent? Does His love reign in me and show through my words and actions? Let us turn to our Savior with trust and repentance, for He will restore us and grant us true freedom and peace. 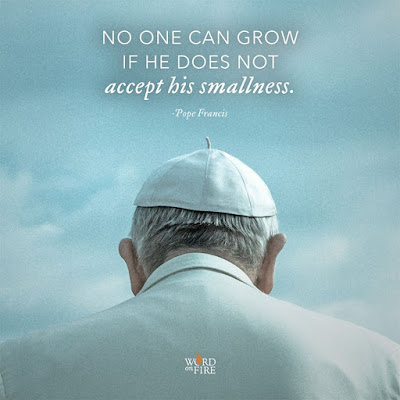 "Very often in prayer we do not have a deep sense of the presence of God.… Really, we are very much like children that are carried in mother’s arms. If we are carried in Our Lord’s arms, we rarely see His face. But we know it is there."
—Ven. Fulton Sheen (1895-1979)

"About all Christmas things there is something a little nobler, if only nobler in form & theory, than mere comfort; even holly is prickly."
—G. K. Chesterton (1874-1936)