The Popish Plot
"Pocket Guide to the Rosary"

'Tis the Thursday of the Third Week of Advent: Advent-link & Wikipedia-link. 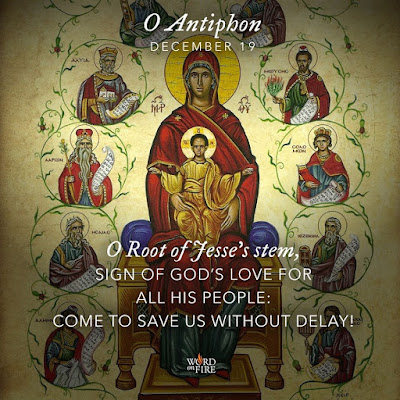 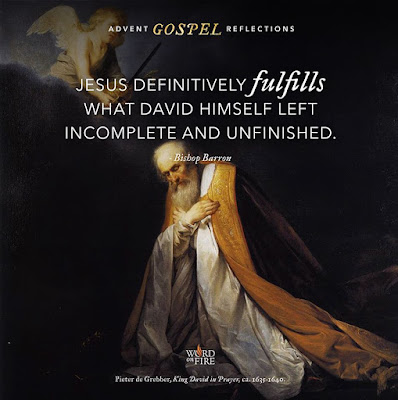 Friends, our Gospel today is from the first chapter of the Gospel of Luke, which is thoroughly drenched in Davidic themes from the Old Testament.

The first thing we hear about Zechariah is that he serves as priest in the Jerusalem temple; and David’s dream was to build the temple in which Zechariah serves. While in the sanctuary, Zechariah is visited by the angel Gabriel; and the temple locale and the announcement of the birth of a child against all expectations brings us back to Hannah’s pregnancy, which resulted in the birth of the forerunner to David. Indeed, Elizabeth’s words upon conceiving—"So has the Lord done for me at a time when he has seen fit to take away my disgrace before others"—powerfully evoke Hannah’s frame of mind when she, after many tears and much prayer, finally became pregnant.

What does this have to do with the life of Jesus? From beginning to end of his preaching career, Jesus’s central theme was the arrival of the kingdom of God, which was understood to mean the ingathering of the scattered tribes of Israel. And what becomes eminently clear in all of the Gospels is that this coming together would happen in and through Jesus himself, much as the knitting together of ancient Israel happened in the person of David. Jesus definitively fulfills what David himself left incomplete and unfinished.

Reflect: Zechariah did not believe the angel Gabriel and was struck mute until John’s birth. Compare this scenario to the Annunciation and how Mary reacted to Gabriel’s news. What spiritual lesson can you draw from this comparison?

When Gabriel speaks to Zechariah, the old man asks, “How shall I know this?” and Gabriel strikes him dumb for doubting. Zechariah's question stems from a lack of hope. He had already given up the hope of having a son for he and Elizabeth were too old. But now there is an angel announcing the impossible to him and still he asks for proof.

The three theological virtues (faith, hope, and love) are linked together. When one increases, they all increase. When one is not fostered, they all diminish. Without hope, faith withers because its object is no longer attainable. Also, without faith or hope, true charity cannot survive for there is no reason to be charitable. Without hope or faith, we live only for the present moment and for ourselves.

When we practice one of these theological virtues, we grow in the other two. When you maintain your hope despite difficulty, it fosters a belief that you can overcome any situation. This hope brings joy that begins to flow over into others. Today, write down 3 things; Something you are hoping for, something that is preventing you from growing in your faith and a work of charity you would like to do this Advent. Pray on the things and ask Our Lord to help increase your hope, charity or faith.

"No one can really enjoy Christmas without sharing that joy with those who, on this blessed day, still need food, work, a home, medical care, a friend, comfort, or faith. The religious spirit of Christmas must find its expression in generosity."
—Pope St. Paul VI (1897-1978, feast day: 29 May)

"In prayer, do not do all the talking. If you went into a doctor’s office, you would not rattle off the symptoms & then rush out… You learned to speak by listening, did you not?… So we are not constantly to be yapping in prayer. Sacred Scripture says, 'Speak, Lord, Thy servant heareth.'"
—Ven. Fulton Sheen (1895-1979)

"Hark! Laughter like a lion wakes
To roar to the resounding plain,
And the whole heaven shouts and shakes,
For God Himself is born again,
And we are little children walking
Through the snow and rain."
—G. K. Chesterton (1874-1936)