'Tis the Friday of the Third Week of Advent: Advent-link & Wikipedia-link. 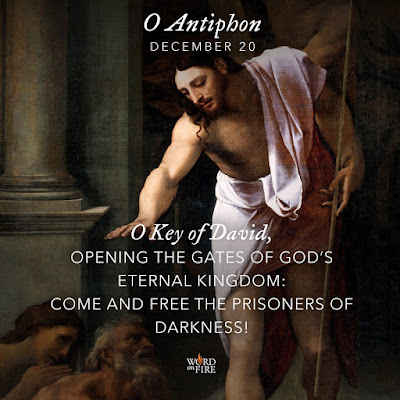 Scripture of the Day
Mass Readings—Friday of the Third Week of Advent
The Book of Isaiah, chapter seven, verses ten thru fourteen;
Psalm Twenty-four (R/. see: seven[c] & ten[b]), verses one & two, three & four(a/b) & five & six;
The Gospel according to Luke, chapter one, verses twenty-six thru thirty-eight. 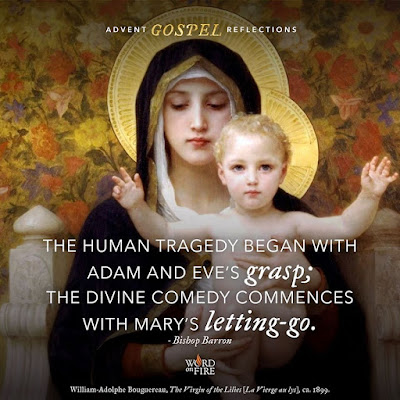 Friends, in today’s Gospel, the angel Gabriel announces to Mary that she has been chosen to be the mother of God.

In the face of this overwhelming word, Mary is confused: "How is this possible, since I do not know man?" And she cannot begin to imagine the full consequences of accepting this invitation: shame, exile, violent pursuit, the final agony on Calvary.

And yet, despite her fear and despite the darkness, she says, "I am the maidservant of the Lord; let it be done to me as you say." At the crucial moment, Mary of Nazareth allows herself to fall in love with God, and in that moment of ecstasy, the Son of God enters the world for its salvation.

The human tragedy began with Adam and Eve’s grasp; the divine comedy commences with Mary’s letting-go. This is why the medieval commentators, with their delicious sense of the co-penetration of all parts of the Bible, observed that the "Ave" of the angel of the Annunciation reverses "Eva," the mother of all the living.

Reflect: Mary said, "Be it done to me as you say." Why is surrender such a critical part of falling in love with God?

When Gabriel announces his news to Mary, she questions, “How can this be?” Mary’s question was full of hope. Her question was not about God's ability to make her a mother, but rather a question about how this would be accomplished. It is a strong tradition in the Church that Mary had vowed to remain a virgin and that her and Joseph were always to have a "celibate" marriage. Was God calling her to something new?

The angel provides the answer to Mary's question. She will not give up her Virginity to conceive and bear the Messiah. God will be the one to act, and "the Holy Spirit will come upon you and the power of the Most High will overshadow you.” We hope not only to live eternally in Heaven, but also that God will give His assistance and bring us there. Mary hoped in the Lord. She could not conceive and bear the Messiah on her own. She could not raise Him on her own. She could not stand beneath the cross without Divine assistance sustaining her. But, when she was overshadowed by the Holy Spirit she received all she needed to be the mother of Christ.

When we offer ourselves to God, His Spirit will empower us to accomplish our vocation as well! What more joy could we have than to know God will make us what He wants us to be? When we follow God, and strive to do His will, He will take care of us and lead us. This is the joy of being a Catholic. We have no need to walk in the darkness of fear or worry, but only in the light of Hope. Today, spend 30 minutes in silent prayer in front of the Blessed Sacrament. Jesus is our Hope. Turn over all anxiety and worry to Jesus who is our hope and He will make us all that He wants us to be.

"The salvation of the people principally depends on good pastors. Nothing contributes more to the ruin of souls than impious, weak, or uninformed clerics."
—Pope Pius VIII (1761-1830, reigned 1829-1830)

"What is the idea that runs all through scripture? It is nuptials. The covenant is based on nuptials. As we used to say in the old marriage ceremony, 'Not even the flood took it away, not even sin.' There was the nuptials of man & woman in the garden of Eden, the nuptials of Israel & God in the Old Testament. In the prophet Hosea: 'I your Creator am our husband.' God is the husband of Israel. In that beautiful passage of the Book of Hosea, God tells Hosea to marry a prostitute, an worthless woman. She leaves him, betrays him, commits adultery, has children by other men, & when the heart of Hosea is broken, God says, 'Hosea, take her back, take her back. She's the symbol of Israel. Israel has been my unworthy spouse, but I love Israel, & I will never let her go.' Hosea taking back the prostitute is the symbol of God's love for his qahol, His church of the Old Testament. Now we come to new nuptials, the nuptials of divinity & humanity in our Blessed Mother."
—Ven. Fulton Sheen (1895-1979)

"In the congested commerce of our time [Christmas] has come to stand rather for goods being sold than for gifts being given."
—G. K. Chesterton (1874-1936)