The Popish Plot: vEaster
"The 2nd Mass in the Bible"

Death without the Eucharist: Day 44
He was forty-four days dying & not yet dead. 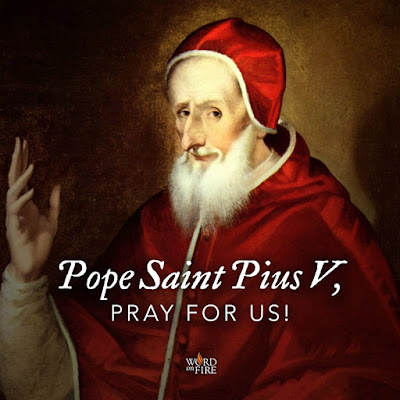 Commentary: Across the water in the Canadas, St. Marie's feast is an obligatory Memorial. Not to be confused with Bl. Marie of the Incarnation, O.C.D. [18 April].

Scripture of the Day
Mass Readings—Thursday of the Third Week of Easter
The Acts of the Apostles, chapter eight, verses twenty-six thru forty;
Psalm Sixty-six (R/. one), verses eight & nine, sixteen & seventeen, & twenty;
The Gospel according to John, chapter six, verses forty-four thru fifty-one.

Friends, in today’s Gospel Jesus declares, "I am the living bread that came down from heaven." The bread is referred to as living. Bread is good, but it’s not alive. Instead, when we take it in, and it is turned by our bodies into fat or muscle or bone, then it comes alive.

But it is just the opposite with the living bread of Christ. This we take in and we become alive in a way that we were not before. And this is why Jesus says that he is bread come down from heaven.

And count the forbearance of our Lord as salvation. So also our beloved brother Paul wrote to you according to the wisdom given him, speaking of this as he does in all his letters. There are some things in them hard to understand, which the ignorant & unstable twist to their own destruction, as they do the other Scriptures.

"The original source of all that is good is the very act of God, who created both the earth & man, & Who gave the earth to man so that he might have dominion over it by his work & enjoy its fruits. God gave the earth to the whole human race for the sustenance of all its members, without excluding or favoring anyone. This is the foundation of the universal destination of the earth’s goods."
—Pope St. John Paul II the Great (1920-2005, feast: 22 October)

"We hardly think about reparation any more. We seem to have dropped it in the Church. We have reparation in the human body. When I had my open-heart surgery, I was bleeding to death. I depended upon eighty people who gave me eighty pints of blood. The human body has only eight pints. Volunteers had to supply eighty pints to keep me alive. They were filling up the quota of my life. And just as we have a kidney transplant, even a heart transplant, so we have the transplanting of merits, of prayers, & sacrifices from one member of the Church to the other, to cure those members of their anemic condition. We're living in a decade that needs reparation more than any other decade in the past one hundred years. But we're failing to find it."
—Ven. Fulton Sheen (1895-1979)