The Stars My Destination: Demo-2 Launch 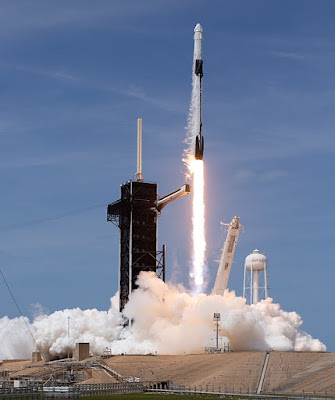 Liftoff! Launch America-link. These United States are once again capable of launching astronauts into outer space after nearly a decade of depending on hitching rides from our partners in Russia. I support the International Space Station (I.S.S.) as an international effort, with both the United States Orbital Segment & the Russian Orbital Segment working together to form one amazing machine that has enabled nigh-on twenty years of continuous human habitation in low earth orbit. But between the increasingly frequent malfunctions with the Russians' Soyuz & Progress spacecraft (designs that originated in the 1960s) & the often contentious terrestrial relations between the United States of America & the Russian Federation, it is good to have an alternate means of delivery crew to the I.S.S.

Code Name: CHAOS
The first SpaceX Dragon capsule to carry astronauts to the I.S.S. has a name: Endeavour, named after the Space Shuttle on which both DM-2 astronauts had their maiden spaceflights. The Endeavour OV-105 is the only Space Shuttle your humble narrator has seen with his own eyes, in the Samuel Oschin Pavilion at the California Science Center in Los Angeles. Seeing the Endeavour, standing under the giant space plane was a tremendously affecting experience, almost mystical; much more affecting & impressive than I'd anticipated.

Bonus! Song o' the Endeavour
The Phenomenauts, "All Go for Launch" from For All Mankind (Space Cadet Mike Papa Whiskey)
Posted by Mike Wilson at 3:22 PM
Email ThisBlogThis!Share to TwitterShare to FacebookShare to Pinterest
Labels: Ad astra per aspera, Liberty & Union, R.B.D.S.O.T.D.