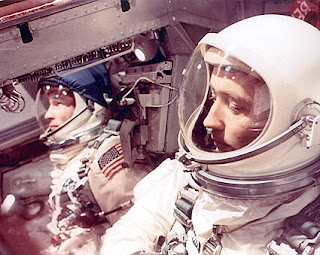 Jim McDivitt & Ed White planned to name their Gemini IV capsule the American Eagle, which would seem to conform quite well to N.A.S.A. management's desire for dignified names, but after wrestling with Gus Grissom over the name of Gemini 3's Molly Brown, the bosses simply banned astronauts naming their spacecraft. The ban endured from Gemini IV (June 1965) 'til Apollo 9 (March 1969), when the need for two distinct call signs for the two distinct spacecraft revived naming. One wonders what great spacecraft names (&, yes, knowing whom we're dealing with here, goofy spacecraft names) we missed out on through the remainder of Project Gemini. One also wonders, had McDivitt & White flown the American Eagle what, if any effect this would have had on the name of Apollo 11's iconic Lunar Module Eagle, which flew just four years later. The legacy of the American Eagle name survived in Gemini IV's mission patch, which in its depiction of a bald eagle bears some resemblance to the Apollo 11 & Apollo 16 mission patches. 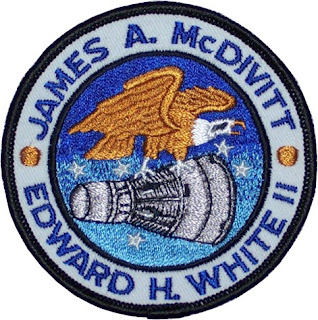 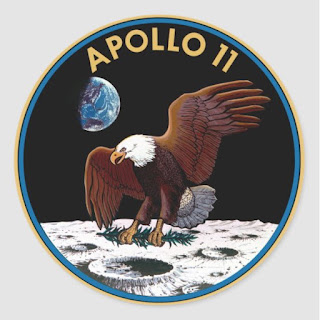 Posted by Mike Wilson at 5:00 PM
Email ThisBlogThis!Share to TwitterShare to FacebookShare to Pinterest
Labels: Ad astra per aspera, Gemini