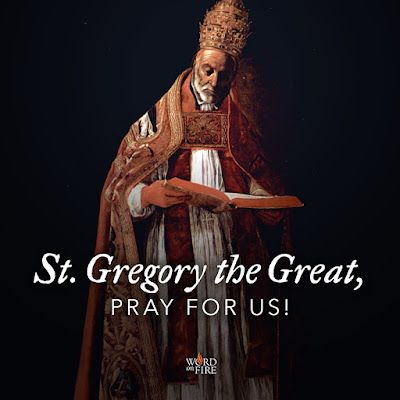 He is famous for instigating the first recorded large-scale mission from Rome, the Gregorian Mission, to convert the then-pagan Anglo-Saxons in England to Christianity. Gregory is also well known for his writings, which were more prolific than those of any of his predecessors as pope.

Scripture of This Day
Mass Readings—Monday of the Twenty-second Week in Ordinary Time
The First Letter to the Corinthians, chapter two, verses one thru five;
Psalm One Hundred Nineteen, verses ninety-seven, ninety-eight, ninety-nine, one hundred, one hundred one, & one hundred two;
The Gospel according to Luke, chapter four, verses sixteen thru thirty.

Friends, in our Gospel for today Jesus reads from Isaiah a prophecy dealing with the Messianic transformation of the world. And then he declares it fulfilled, precisely in him. The audience initially is positive. And then we see why they are so favorable: “They also asked, ‘Isn’t this the son of Joseph?’” Undoubtedly, they are thinking: well, if this man is the Messiah, and he’s a local boy, we will benefit enormously! As Tip O’Neill said, “All politics is local.”

But Jesus commences to throw them for a loop. He invokes two uneasy stories from the Old Testament tradition, the first dealing with Elijah. During a drought Elijah is sent, not to an Israelite, but to a widow from Sidon, a foreigner. And the second deals with Elisha, who cleanses from leprosy, not an Israelite, but Naaman the Syrian.

The readings, psalm, & Gospel acclamation may be taken from the Masses for Various Needs & Occasions: For the Blessing of Human Labor. The following are suggested from among the many options.

"Let us at long last place human life itself among those precious assets that deserve our every protection. Doctors & social workers, lawmakers, journalists, & teachers ought to be in conscience bound to call publicly for the legal protection of human life."
—Pope St. John Paul II the Great (1920-2005, feast day: 22 October)

"Jesus has shown me the only path which leads to the divine furnace of love."
—St. Thérèse of Lisieux, Doctor of the Church (1873-1897, feast day: 1 October)