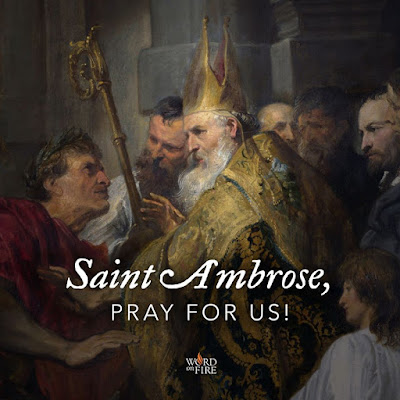 Ambrose was one of the four original Doctors of the Church, & is the patron saint of Milan. He is notable for his influence on [St.] Augustine of Hippo [28 August]. Traditionally, Ambrose is credited with promoting "antiphonal chant," a style of chanting in which one side of the choir responds alternately to the other.

Scripture of the Day
Mass Readings—Friday of the First Week in Ordinary Time
The Book of Isaiah, chapter twenty-nine, verses seventeen thru twenty-four;
Psalm Twenty-seven, verses one, four, & thirteen & fourteen;
The Gospel according to Matthew, chapter nine, verses twenty-seven thru thirty-one.

Friends, today’s Gospel passage celebrates the faith of two blind men. To have faith is—to use the current jargon—to live outside the box, risking, venturing, believing the impossible. When we remain in the narrow confines of our perceptions, our thoughts, or our hopes, we live in a very cramped way. We become closed off to the possibility that sometimes, the power of faith is manifested in spectacular and immediately obvious ways. When someone consciously and confidently opens himself to God, acting as a kind of conduit, the divine energy can flow.

Faith allows someone to live in detachment from all of the ups and downs of life. In the language of St. Ignatius of Loyola: "Lord, I don’t care whether I have a long life or a short life, whether I am rich or poor, whether I am healthy or sick." Someone that lives in that kind of detachment is free, and because they are free, they are powerful. They are beyond the threats that arise in the context of this world. This is the source of 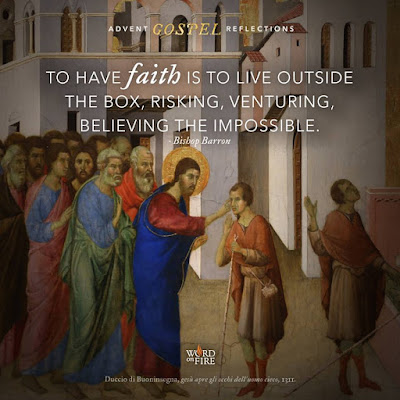 Mass Readings—Memorial of St. Ambrose
The Letter to the Ephesians, chapter three, verses eight thru twelve;
Psalm Eighty-nine;
The Gospel according to John, chapter ten, verses eleven thru sixteen.

"The Beatitudes demand a spiritual renewal based on the radical following of Christ the Priest, Teacher, & Good Shepherd. This means making a gift of one's life, an offering to God Who calls us to build the spiritual edifice that is the Church."
—Pope St. John Paul Ii the Great (1920-2005, feast day: 22 October)