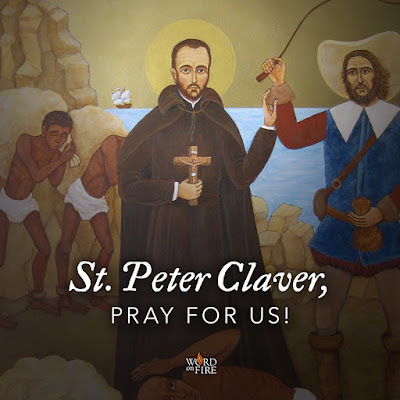 He labored unceasingly for the salvation of the African slaves & the abolition of the Negro slave trade. Through his efforts three hundred thousand souls entered the Church. Furthermore, he did not lose sight of his converts when they left the ships, but followed them to the plantations to which they were sent, encouraged them to live as Christians, & prevailed on their masters to treat them humanely.

O Lord, St. Peter Claver reached out in a truly heroic manner to those who were of a different race & religion from him. May my love be as fruitful & as color blind.

Scripture of the Day
Mass Readings—Monday of the Twenty-third Week in Tempus per annum
The Letter to the Colossians, chapter one, verse twenty-four thru chapter two, verse three;
Psalm Sixty-two, verses six & seven, & nine;
The Gospel according to Luke, chapter six, verses six thru eleven.

Friends, in our Gospel today Jesus heals a man with a withered hand. As I’ve said many times before, we tend to domesticate Christ, reducing him to a guru or a teacher, one spiritual guide among many. But this is to do violence to the Gospel, which presents him not simply as teacher but as Savior.

I realize that the culture militates against Christianity at this point, for it steadily teaches the ideology of self-esteem and self-assertion. "I’m okay and you’re okay." "Who are you to tell me how to behave?"

But this sort of thing—whatever value it might have politically or psychologically—is simply inimical to a biblical Christianity. The biblical view is that we have, through the abuse of our freedom, gotten ourselves into an impossible bind. Sin has wrecked us in such a fundamental way that we have become dysfunctional. Until we truly feel what it means to be lost and helpless, we will not appreciate who Jesus is and what he means.

Jesus is someone who has rescued us, saved us, done something that we could never, even in principle, do for ourselves.

"Love is characterized by a deep respect for all people, regardless of their race, belief, or whatever makes them different from ourselves. Love responds generously to the needs of the poor, & it is marked by compassion for those in sorrow."
—Pope St. John Paul II the Great (1920-2005, feast day: 22 October)

"Remember that you have been created for greater things. Never stoop lower than that ideal. Let nothing satisfy you but God."
—St. Teresa of Calcutta (1910-1997, feast day: 5 September) 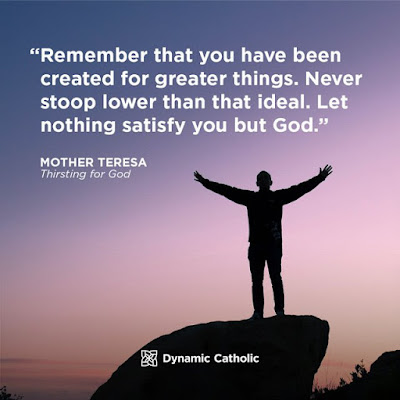