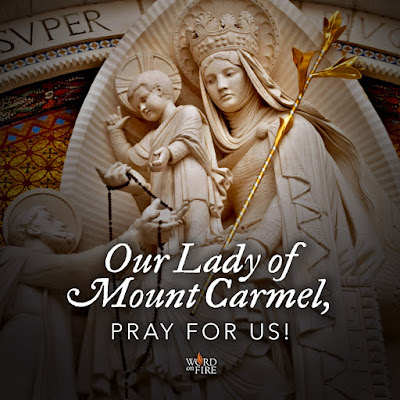 Blessed Virgin Mary, intercede for me so that I may view the world with your eyes of love. Grant that I may always give witness to the goodness of God by following your example of generosity.

Friends, in today’s Gospel, the Lord offers to relieve us of our burdens. He is identifying everyone who feels oppressed by the world: by sin, worries, suffering, injustice, the death of a relative or friend, the fear of death—whatever it may be.

Relief comes when we submit to his kingship, his new way of ordering things. We are meant to imagine ourselves as pack animals who have been tied under a yoke and are under the command of a farmer. It seems rather demeaning, but this is what submission to Christ’s lordship looks like: we serve his purposes and go where he wants us to go.

Is Christ commanding your life in every detail? Is he the Lord of your family life? Of your recreational life? Of your professional life? Is he Lord of every room in your house, including the bedroom? Are you totally given over to him, under his lordship?

I know that this may sound oppressive, but remember, “My yoke is easy, and my burden light.” When we surrender to the path of love that he has laid out for us, our lives become infinitely lighter, easier, and more joyful, for we are moving with the divine purpose

Mass Readings—Optional Memorial of Our Lady of Mount Carmel
The Book of Zechariah, chapter two, verses fourteen thru seventeen;
The Gospel according to Luke, chapter one, verses forty-six & forty-seven, forty-eight & forty-nine, fifty & fifty-one, fifty-two & fifty-three, & fifty-four & fifty-five
(R/. forty-nine; or, "O Blessed Virgin Mary, you carried the Son of the eternal Father");
The Gospel according to Matthew, chapter twelve, verses forty-six thru fifty.

"The Annunciation, therefore, is the revelation of the mystery of the Incarnation at the very beginning of its fulfillment on earth. God’s salvific giving of Himself & His life, in some way to all creation but directly to man, reaches one of its high points in the mystery of the Incarnation."
—Pope St. John Paul II the Great (1920-2005, r. 1978-2005; feast: 22 October)

"We are entirely at the disposal of the Church. We profess a deep personal love for the Holy Father. We surrender ourselves completely to be united with Him as carriers of God's love. Pray for us that we don't spoil the work God has called us to do."
—St. Teresa of Calcutta, M.C. (1910-1997, feast: 5 September)

"The choice before God in creating the world lay between creating a purely mechanical universe, peopled by mere automatons, or creating a spiritual universe in which there would be a choice of good & evil. What was the condition then of such a universe? He had to endow us with the power to say yes & no & to be captains of our own fate & destiny. Morality implies responsibility & duty, but these can exist only on the condition of freedom. Stones have no morals because they are not free. We do not condemn ice because it is melted by heat. Praise & blame can be bestowed only on those who are masters of their own will. It is only because you have the possibility of saying no, that there’s so much charm in your character when you say “yes.” Take the quality of freedom away from anyone, & it is no more possible for him to be virtuous than it is for the blade of grass which he treads beneath his feet to be virtuous. Take freedom away from life, & there would be no more reason to honor the fortitude of martyrs than there would be to honor the flames which kindle their stakes. Is it therefore any impeachment of God that He chose not to reign over an empire of chemicals? If God has deliberately chosen a kind of empire to be ruled by freedom rather than by force, & if we find that His subjects are able to act against His will, as stars & atoms cannot, does this not prove that He has given to those human beings the chance of breaking allegiance so that there might be meaning & purpose in that allegiance when they freely chose it? Here we have a mere suggestion about the possibility of evil."
—Ven. Fulton Sheen (1895-1979)