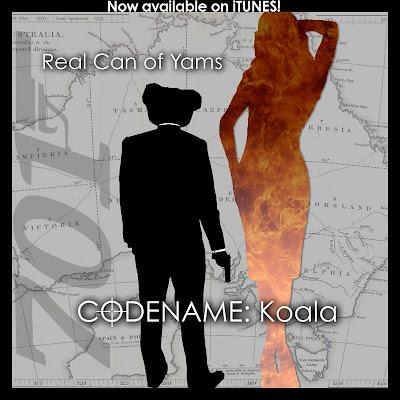 In all seriousness, kind readers, K. Steeze has been working on CODENAME: Koala since 2006, doing yeoman's work, almost all by his lonesome. He's shelled out a good many of him hard-earned bucks on the professional-quality mixing and editing machinery and software needed to make CODENAME: Koala the thoroughly professional album it is. I say this not just because my alter ego The Last Angry Man is a a member of Real Can of Yams, CODENAME: Koala is a phenomenal album, by turns heartfelt and whimsical. Buy it today, only on iTunes!

CODENAME: Koala by Real Can of Yams

12 Tracks of Awesome!
"Carpe Diem"
"The Lando System"
"The Cowboy, the Indian, and the Cyborg"
"Late Night Swim"
"A Cold Night in December"
"Teddy's First Night in the Drunk Tank"
"It's Your Turn, Part II"
"Our Best Song Ever!"
"Shiver Me Timbers"
"Love In the Time of Scurvy"
"Girls Are Better Than Electronics… Most of the Time"
"Carpe Noctem"

Check out CODENAME: Koala on MySpace

That's CODENAME: Koala, ask for it by name!

The Stars My Destination
There's good news and there's bad news. Or, more accurately, there's great news, good news, and more-neutral-than-bad news. The great news is that the Hubble Space Telescope continues to be the best thing since sliced bread: Hubblelink. These pictures are majestic almost beyond imagining.

The good news is that the Ares I rocket is one concrete step closer to breaking the bonds of gravity and ferrying our brave astronauts to the Moon and beyond: N.A.S.A.link and B.B.C.link.

The not-so-great, but not-so-bad news is that the crew of the Discovery haven't been able to come home yet thanks to the lousy Florida weather: N.A.S.A.link2 and B.B.C.link2.

Elsewhere, is anyone really surprised that instead of sending men into space, the Japanese have sent a robot: space trucklink. I tease because I love the Japanese, they are so unabashedly weird. I will be fascinating in the years ahead to watch the European A.T.V. and Japanese H.T.V. unmanned cargo craft keep the astronauts and cosmonauts aboard the International Space Station fat and happy in the lamentable pause in American spaceflight between the retirement of the shuttle fleet and the full activation of the Orion spacecraft.

Speaking of the years ahead, space is the one sphere of activity in which I openly admire the Russians and their glorious persistence: foreverlink. Even if they have to keep a space station in orbit with shoelaces and chewing gum, those magnificent bastards just don't have an ounce of quit in them!

So, what do you think, Obama voters? Will your man go ahead and fulfill his campaign promise to put an end to nearly fifty years of American manned spaceflight? Hyperlink of Doom! Is the end of manned space flight the change you believed in? Because it's certainly the change you voted for, curse you.

This Week in Motorsport
I remain undecided, if I will even pick a team and/or driver to whom to pledge my loyalty as a fan, much less to which team and/or driver, but the image below makes a compelling case for Manor Grand Prix, one of the three brand-new teams scheduled to compete for the 2010 World Championship. 'Tis a HAL-generated image, not a photograph of Manor's '10 car, but I am entranced by the idea of such a black-liveried F1 car (though of course the real car will be defaced—in the technical, not derogatory, sense—with various sponsorship logos).