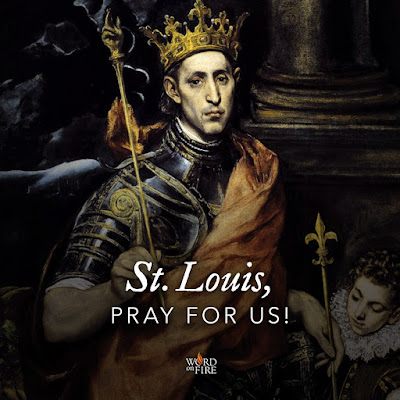 St. Louis banned trials by ordeal, tried to prevent the private wars that were plaguing the country, & introduced the presumption of innocence in criminal procedure. Following a vow he made after a serious illness & miraculous cure, Louis IX took an active part in the Seventh & Eighth Crusades. He died from dysentery during the latter crusade.

'Tis also the Optional Memorial of Saint Joseph Calasanz, Priest, Sch.P. (1557-1648, A.K.A. Josephus a Mater Dei), founder of the Piarists, A.K.A. the Scolopi, formally the Order of Poor Clerics Regular of the Mother of God of the Pious Schools: Saint-link ūnus, Saint-link duo, & Wikipedia-link; Wikipedia-link Sch.P. 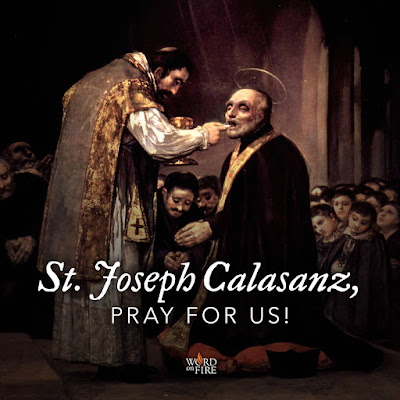 St. Joseph was a Spanish Catholic priest, educator, & the founder of the Pious Schools, providing free education to the sons of the poor, & the religious order that ran them.

'Tis also the festival of Blessed Luigi of the Consolata, Priest (1922-1977, A.K.A. Andrea Bordino): Blessed-link & Wikipedia-link.

Friends, in today’s Gospel Jesus turns his sharp eye and withering critique on the many ways that religious leaders fall into corruption. What precisely is bothering Jesus? Some religious leaders get their kicks from burdening people, laying the law on them heavily, making demands that are terrible, exulting in their own moral superiority.

At the core of Jesus’ program is a willingness to bear other people’s burdens, to help them carry their loads. And this applies to the moral life as well. If we lay the burden of God’s law on people, we must be willing, at the same time, to help them bear it.

Another classic problem with religious people and especially religious leaders: they use the law and morality as a means of inflating the ego. The trouble is that this drug wears off rather quickly, and then we want more of it. We need a greater title, more respect, more recognition.

What is Jesus’ recommendation for those caught in this dilemma? To be great is to be a servant: lowly, simple, often forgotten. Eschew marks of respect; don’t seek them. Be satisfied with doing your work, whatever it is, on behalf of God’s kingdom.

Mass Readings—Optional Memorial of St. Louis
The Book of Isaiah, chapter fifty-eight, verses six thru eleven;
Psalm One Hundred Twelve, verse one;
The Gospel according to Matthew, chapter twenty-two, verses thirty-four thru forty.

"Christians should conscientiously take up their civic duties in a spirit of disinterested service. This will lead them to renounce seeking their personal gain, power, or prestige, if it is harmful to others."
—Pope Bl. Paul VI (1897-1978, feast day: 26 September)

"Jesus does not look so much at the greatness of our actions, or even at their difficulty, as at the love with which we do them."
—St. Thérèse of Lisieux, Doctor of the Church (1873-1897, feast day: 1 October)

Question from a journalist: "What has to change in the Church?"