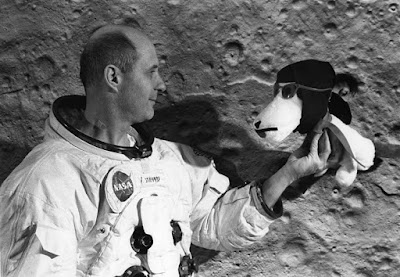 Commentary: When most persons think about the Apollo program, to the admittedly limited extent that most persons are ever likely to think about Apollo, those thoughts are most likely confined to Apollo 11 (the first Moon landing), Apollo 13 (the "successful failure"), & Apollo 8 (the first journey from the Earth to the Moon & back). But every Apollo flight was important & each preparatory mission (Apollos 7, 8, 9, & 10) played a vital role in laying the groundwork for Armstrong, Collins, & Aldrin's epochal triumph on Apollo 11. "Close but No Cigar" tells the tale of a man who dates three amazingly beautiful, intelligent, & accomplished women, only to reject each because of absurdly trivial reasons. Anyone who looks down their earthbound nose at the heroes of Apollo 10 & their accomplishments in space would miss the joke of "Close but No Cigar."