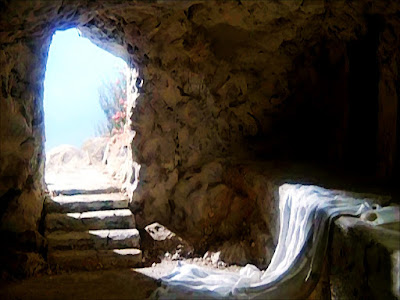 The Popish Plot: vEaster
"Churchy Stuff in the Time of Quarantine, Part 1"

Death without the Eucharist: Day 40
He was forty days dying & not yet dead.

Friends, in today’s Gospel Jesus joins two disciples on the road to Emmaus, but they do not recognize him. In the course of their conversation he opens the Scriptures to them, disclosing the great biblical patterns that make sense of the “things” that they have witnessed. The interpretive key is none other than his own suffering and death, his willingness to go to the limits of godforsakenness in order to save those who had wandered from the divine love.

And through this process they begin to understand the Bible in its totality, and their hearts burn within them. The two disciples press him to stay with them as they draw near the town of Emmaus. Jesus sits down with them, takes bread, says the blessing, breaks it, and gives it to them—and in that moment they recognize him.

The ultimate means by which we understand Jesus Christ is not the Scriptures but the Eucharist, for the Eucharist is Christ himself, personally and actively present. The embodiment of the Paschal Mystery, the Eucharist is Jesus’ love for the world unto death, his journey into godforsakenness in order to save the most desperate of sinners, his heart broken open in compassion.

…no longer as a slave but more than a slvave, as a beloved brother, especially to me but how much more to you, both in the flesh & in the Lord.

Commentary: Saint Paul's letter to Saint Philmon isn't divided into chapters, merely twenty-five verses. Above is the only verse sixteen in the document.

Otherwise, 26 April would be the festival of Our Lady of Good Counsel: Madonna-link & Wikipedia-link.

"Our entire good consists not only in accepting the truth of God's word, but in persevering in it."
—St. Francis de Sales, Doctor of the Church (1567-1622, feast: 24 January)