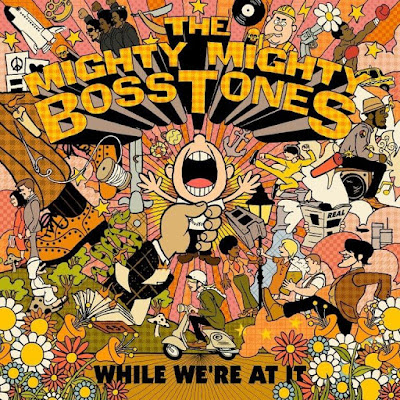 The Mighty Mighty Bosstones, "Wonderful Day for the Race" from While We're at It (Rude Boy Mike Papa Whiskey)

Skammentary: About two-thirds of the way through "Wonderful Day for the Race," the music trails off for a moment before bursting back into the boisterous finale. When performed live last August, that moment lasted half a minute or more as the Bosstones stopped & took a knee. To one unfamiliar with The Mighty Mighty Bosstones & their corpus of music, this gesture might be incomprehensibly strange. They were reverencing each & every precious member of the one human race. We so often dismiss each other, dismiss ourselves as inconsequential, as disposable. This is evil, an error so fundamentally mistaken as to be diabolical. This is so much of what Pope Francis means when he hammers away against the "throwaway culture." The answer to this folly is solidarity, the solidarity that has always been at the core of both ska & Christianity. We are all one, we are meant to be one.

"Now let me say this about that:
We might not know where we are at,
Where we have been, where we are going,
And it might not be worth it knowing.
We're unequipped for the comprehension,
How we tripped into this dimension,
That about this let me say:
For the race it's a wonderful day.

"What a wonderful day for the race
Everywhere it's taking place!
I swear you'll hear one wasn't run,
But I'm talking bout the human one.

"Is there a better understanding
Why it was we wound up landing
Where our feet are firmly planted?
Not so firmly we were granted
The permission and the clearance.
Let there be no interference
Anyhow, but either way
For the race it's a wonderful day

"What a wonderful for the race
Everywhere it's taking place!
I swear you'll hear one wasn't run,
But I'm talking bout the human one.

"What a wonderful for the race,
Every smile on every face!
Every day until it's done
I'm talking bout the human one…"