The Queue | The Stars My Destination

In quarantine, I've been listening to fewer Catholic podcasts & more space podcasts. (More on that another time.) These resources are helping to fuel "The Explorers' Club's" post-centenary-of-the-Great-War project to celebrate manned spaceflight: the fiftieth anniversaries of the Project Apollo Moon landings (& to catch up on the fifty-ish anniversaries of Apollos 7, 8, 9, & 10), the fifty-fifth anniversaries of Project Gemini, the fifty-eight & fifty-ninth anniversaries of Project Mercury, & the Soviet space programs. Alan Bean (1932-2018) walked on the Moon during Apollo 12 (see: below) & I've had his book, Apollo: An Eyewitness Account, in my library for years; so, without setting aside No Greater Love (duel to the death!), now seems like a propitious moment to finally read Apollo, a coffee-table book that showcases Bean's paintings. 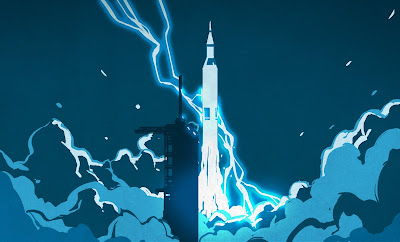