Life without the Eucharist: Day 19
He was nineteen days dying & not yet dead. 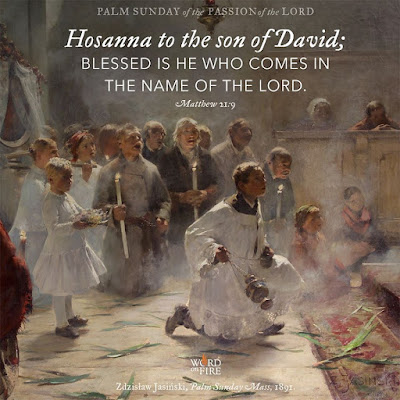 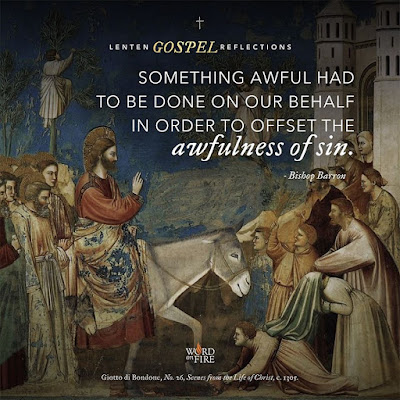 Friends, on this Palm Sunday, Matthew’s magnificent Gospel of the Passion bids us to reflect on the seriousness of sin.

So the question was—and remains—why would God’s salvation of the human race have to include something as horrifying as the Crucifixion of the Son of God?

Here’s the point. The Scriptural authors understand sin not so much as a series of acts as a condition in which we are stuck. No amount of merely human effort could possibly solve the problem. Something awful had to be done on our behalf in order to offset the awfulness of sin.

With this biblical realism in mind, we can begin to comprehend why the Crucifixion of the Son of God was necessary. The just rapport between God and human beings could not be reestablished either through our moral effort or with simply a word of forgiveness. Something had to be done—and God alone could do it.

Reflect: Meditate on one of Christianity’s most mysterious truths: that the Crucifixion of the Son of God was necessary.

Scripture Study—Exodus 90: Day 84
The Book of Exodus, chapter forty, verses one thru seventeen.

On that day it shall be said to Jerusalem:
"Do not fear, O Zion;
let not your hands grow weak."

Otherwise, 6 April would be the commemoration of Saints Theodore & Pausilippus, Martyrs (died circa 130), martyred in the reign of the Roman emperor Hadrian: Martyr-link Tango, Martyr-link Papa, & Wikipedia-link. 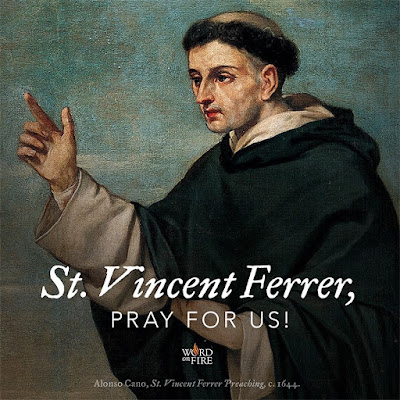 'Twould also be the commemoration of Saint Catherine of Palma, Religious (1533-1574): Saint-link & Wikipedia-link.

"Fix your minds on the passion of Lord Jesus Christ. He Himself gave us an example of perfect patience & love. We, then, are to be patient in adversity."
—St. Francis of Paola (1416-1507, feast: 2 April) 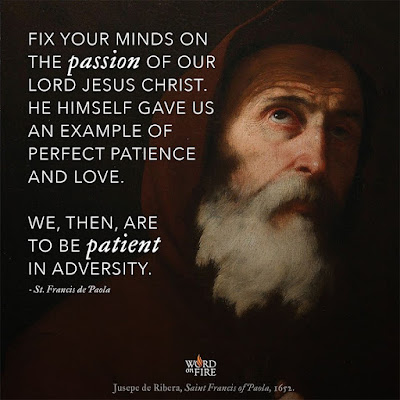 "Our Lord spoke from the cross to those who hated, for there are an abundance in the world who cannot endure His name. They hurled a challenge to Him. They said, 'If you are the Son of God, come down from that cross.' Come down & we'll believe. Sure, they will believe. They'll believe anything: just no cross, no mortification, no self-denial. This is not weakness to hang on the cross. This is obedience to the law of sacrifice. If He came down, He never would have saved us. It is human to come down. It is divine to hang there. So there are many who say, 'I'll believe anything. I'll believe that He is divine; I'll believe in His Church; I'll believe in His pontiff, only no cross, no sacrifice.' That's all. George Bernard Shaw said, 'It's that that bars the way.' Sure, it bars the way. It bars the way to hell. And for them our Blessed Lord merely prayed for forgiveness. He said, 'Father, forgive them, they know not what they do.' It is not wisdom that saves, it is ignorance. If we knew what we were doing when we crucified the Lord, we would never be saved. It is only in the ignorance of what we do when we crucify Him that we come within the pale of hearing the cry, forgive."
—Ven. Fulton Sheen (1895-1979)

"Red is the most joyful & dreadful thing in the physical universe; it is the fiercest note, it is the highest light, it is the place where the walls of this world of ours wear thinnest & something beyond burns through. It glows in the blood which sustains & in the fire which destroys us, in the roses of our romance & in the awful cup of our religion. It stands for all passionate happiness, as in faith or in first love."
—G. K. Chesterton (1874-1936)