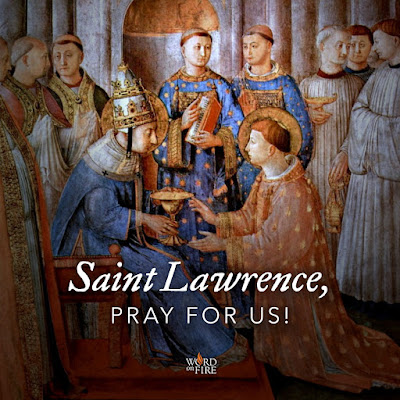 He was one of the seven deacons of the city of Rome under Pope [St.] Sixtus II [7 August] who were martyred in the persecution of the Christians by the order of the Roman Emperor Valerian.

Friends, our Gospel for today contains one of the most beautiful and terrible summations of the Christian message: "Amen, amen, I say to you, unless a grain of wheat falls to the ground and dies, it remains just a grain of wheat; but if it dies, it produces much fruit."

And now this one upon whom the crowds had pinned their hopes is speaking of falling to the earth and dying. And then it gets stranger. "The man who loves his life loses it, while the man who hates his life in this world, preserves it to life eternal." Come again?!

To understand what all this means, we should go back to the grain of wheat that falls to the earth. A seed’s life is inside, yes, but it’s a life that grows by being given away and mixing with the soil around it. It has to crack open, be destroyed.

"Christ is absolute Truth; in Him the Father offers human beings the complete answer to all the questions that worry them. In Christ we can discover the full truth about ourselves & about the world."
—Pope St. John Paul II the Great (1920-2005, feast day: 22 October)

"God works upon your soul. He does not work like a key in a lock; He works less visibly than a father on a son, but His love speaks to our freedom in the same mysterious words, I and you: as one heart to another. Because God is the very embodiment of love, His love inspires you to be what you are meant to be: a free person in the highest sense of the word. The more you are led by God’s love, the more you become yourself, and it is all done without ever losing your freedom."
—Ven. Fulton Sheen (1895-1979)