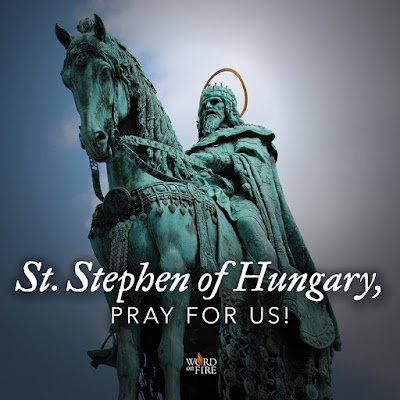 Commentary: Wayback Machine. Husband of Bl. Gisela of Hungary [7 May] &, with her, father of St. Emeric of Hungary [4 November].

After succeeding his father in 997, Stephen had to fight for the throne against his relative, Koppány, who was supported by large numbers of pagan warriors. He protected the independence of his kingdom by forcing the invading troops of Conrad II, Holy Roman Emperor, to withdraw from Hungary.

Scripture of the Day
Mass Readings—Friday of the Nineteenth Week in Ordinary Time
The Book of Joshua, chapter twenty-four, verses one thru thirteen;
Psalm One Hundred Thirty-six, verses one, two, & three; sixteen, seventeen, & eighteen; & twenty-one, twenty-two, & twenty-four;
The Gospel according to Matthew, chapter nineteen, verses three thru twelve.

Friends, in today’s Gospel Jesus teaches about the sanctity and permanence of marriage. Now we begin to see why the love of a husband and wife is a sacrament of God’s love. The Father and the Son—while remaining distinct—give themselves utterly to each other, and this mutual giving is the Holy Spirit.

So when two people come together in love and form one flesh, they mimic the love between the Father and the Son. And when their love gives rise to a child, this mimics sacramentally the spiration of the Holy Spirit. Father, mother, and children are evocative of the divine Father, Son, and Holy Spirit.

And this is why Jesus speaks so forcefully about marriage, and why his Church, at its best, has echoed him up and down the centuries. It is because marriage is such a sacred sign that the Church has sought so assiduously to protect it.

I know that the Church gets a bad rap for surrounding marriage and sexuality with so many rules. I realize that libertarians through the ages have fought against the supposed uptight moralism of the Church. But human beings always surround precious things with laws, restrictions, and prohibitions.

"Always remain close to the Catholic Church, because it alone can give you true peace, since it alone possesses Jesus in the Blessed Sacrament, the true Prince of Peace."
—St. Pio of Pietrelcina (Padre Pio; 1887-1968, feast day: 23 September)