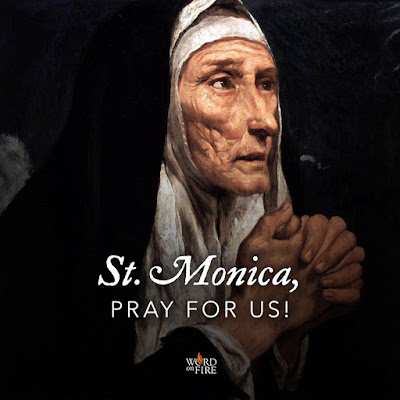 Saint Monica, also known as Monica of Hippo, is Saint Augustine of Hippo's mother [Doctor of the Church, 28 August]. Saint Ambrose [Doctor of the Church, 7 December] became Monica's spiritual director, along with Augustine's. She accepted his advice in everything & had the humility to give up some practices that had become second nature to her. Monica became a leader of the devout women in Milan as she had been in Tagaste.

Friends, on this day we remember St. Monica, who prayed persistently for the conversion of her son, St. Augustine of Hippo.

Even though petitionary prayer—asking God for something—seems simpler and more basic than contemplation, it’s more difficult to make sense of theologically. If God is omniscient, what is the point of telling him what you need? And if God cannot change, what is the point of asking him for anything?

The prayer for the liturgy of St. Monica sheds some light on these questions. The text begins as follows: "Lord, you graciously received the tears of Monica for the conversion of her son Augustine." Mind you, it does not say that the tears of Monica moved God to act or compelled him somehow to change the structure of his providence. But it does say that God accepted those tears in coordination with granting the grace of conversion to her son, implying that God himself was effectively crying through the tears of Monica.

God indeed knows everything about everything, so he is aware of what we need before we ask; but like a good parent, he delights in receiving our tearful requests—even if, like a good parent, he does not always respond the way we would like him to. And God, as the unmoved mover, can never be changed by our prayer; but through whatever is good and right and true in our prayer, God is already praying through us.

Commentary: Brother of the abbess St. Cæsaria of Arles [12 January].

Scripture of the Day
Mass Readings—Tuesday of the Twenty-first Week in Ordinary Time
The First Letter to the Thessalonians, chapter two, verses one thru eight;
Psalm One Hundred Thirty-nine, verses one, two, & three & four, five, & six;
The Gospel according to Matthew, chapter twenty-three, verses twenty-three thru twenty-six.

"I look to all of you, brothers & sisters of every state of life—to you, Christian families, to you, the sick & elderly, & to you, young people: Confidently take up the Rosary once again. Rediscover the Rosary in light of Scripture, in harmony with the Liturgy, & in the context of your daily lives. May this appeal of mine not go unheard!"
—Pope St. John Paul II the Great (1920-2005, feast day: 22 October)

"Our Lord was hopeful about humanity. He always saw men the way he originally designed them. He saw through the surface, the grime & the dirt, the real man underneath. He never identified a person with sin. He saw sin as something alien & foreign, something that did not belong to a man, something that mastered him but from which he could be freed in order to be his real self. Just as every mother sees her own image & likeness beneath the dirt on the face of her child, so God always saw the divine image & likeness beneath our sin. He looked on us much the same way a bride looks on a bridegroom the day of marriage, & as a bridegroom looks on a bride: each to the other looks the best."
—Ven. Fulton Sheen (1895-1979)