'Tis the Nineteenth Sunday in Ordinary Time (Tempus per annum, "time during the year"): Wikipedia-link.

Friends, in today’s Gospel Jesus urges us to be ready for his second coming. It reminds me of John the Baptist preparing us: "Make ready the way of the Lord, clear him a straight path." He is saying that his job is to prepare for the mighty coming of the Lord. A change is coming, a revolution is on the way, a disaster (the destruction of the old) is about to happen. Prepare the way of the Lord.

And what is the manner of preparation? It is a baptism of repentance. Baptism—an immersion in water—reminded first-century Jews of the exodus, passing through the Red Sea, leaving the ways of slavery behind.

metanoia)—going beyond the mind that you have. How our minds are conditioned by the fallen world! How our expectations are shaped, stunted by what has gone before. The world of Tiberius and Pilate and Herod and Caiaphas has shaped our imagination. It’s time, John is saying, for a new mind, a new set of eyes, a new kind of expectation. God is about to act!

Catholicism is not a lifeless set of rules & regulations; it is a lifestyle. Catholicism is a dynamic way of life designed by God to help you explore your incredible potential. 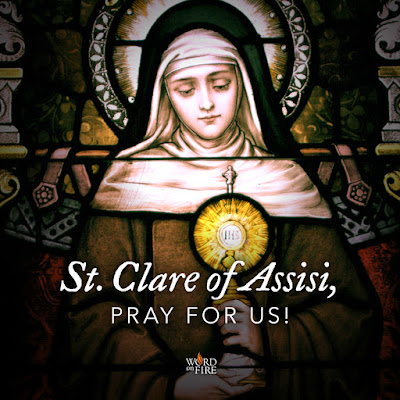 Commentary: Daughter of Bl. Ortolana of Assisi [?] & sister of St. Agnes of Assisi [16 November], both of whom followed her into San Damiano.

Lord Jesus, St. Clare celebrated the love of God. Teach me to recognize Your love in nature, in people, in the Church, & in my own heart.

"In humanity beauty produces love; in Christ love precedes & produces the beauty of the Church, that is, the beauty of humanity loved & redeemed by Christ, & thus brought back to its original perfection. The Church, ablaze with Christ's Spirit, is like a bright lamp."
—Pope St. Paul VI (1897-1978, feast day: 29 May)

"What purpose did God have in mind in making this world? The answer is that God intended to build a moral universe. He willed from all eternity to build a stage on which characters would emerge. He might have made a world without morality, without virtue, without character. He might have made a world in which each of us would have sprouted goodness with the same necessity, for example, as that of the sun rising in the east & setting in the west. But He chose not to make that kind of a world, not to make a world in which we would be good, as fire is hot & ice is cold. He willed to make a moral universe so that by the right use of the gift of freedom characters might emerge. What does God care for in things tiled into an infinity of space even though they be diamonds? For if all the orbits of heaven were so many jewels, glittering as the sun, what would their external but undisturbed balance mean to Him in comparison with the single character which could take hold of the tangled skein of a seemingly wrecked & ruined life & weave out of them the beautiful tapestry of saintliness & holiness?"
—Ven. Fulton Sheen (1895-1979)