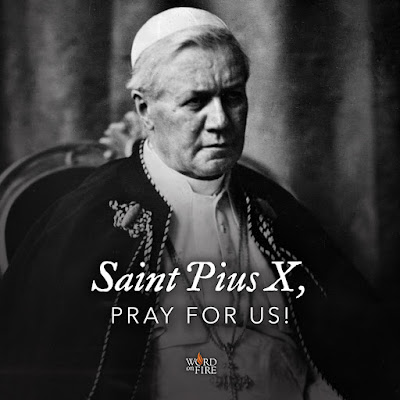 Lord Jesus, increase my love for the Church & the Eucharist after the example of pope St. Pius X. May it lead me to the sanctity we see in him.

'Tis also the festival of Our Lady of Knock (apparition 21 August 1879): Madonna-link & Wikipedia-link.

Scripture of the Day
Mass Readings—Wednesday of the Twentieth Week in Ordinary Time
The Book of Judges, chapter nine, verses six thru fifteen;
Psalm Twenty-one, verses two & three, four & five, & six & seven;
The Gospel according to Matthew, chapter twenty, verses one thru sixteen.

Friends, in today’s Gospel, we hear of a landowner who goes out to hire workers for his field, hiring some the first thing in the morning and then others at different times during the day. Then he pays each the same wage. Why should those who have worked only an hour be paid the same as those who have slaved in the hot sun all day? Is the landowner really being unfair?

Perhaps he saw something that the first workers didn’t see. Perhaps he saw, in his compassion, that their day spent waiting for work to feed their families was a terrible one, marked by anxiety and a sense of failure. Or perhaps he knew that they were poorer, more desperate, less gifted. Maybe he knew they needed a bit more encouragement.

Here’s a second perspective on this mysterious story. We sinners are very susceptible to a reward-centered understanding of our relationship to God. Tit for tat; I do this, then you better do that. But this is very juvenile.

We’ve been invited to work in the vineyard of the Lord. That is the greatest privilege imaginable, to participate in the Lord’s work of saving the world. Why are we fussing about rewards? And how liberating this is! I don’t have to spend my life fussing and spying and worrying and comparing. I can live.